John DiLuna
Service Management
Early in my career, a respected boss and mentor left an article on my desk about the doctrine of “Completed Staff Work.” The author’s thoughts on followership were presented in a memorandum from the early 1940s and present a relatively straightforward concept;when presenting a solution, the only remaining action should be approval or disapproval of the completed action. Your views should be placed before the decision maker in finished form so they can use them to achieve results.
While the language of the original version appears a bit crass (I have included it below for its dramatic effect) by today’s standards, it is largely accepted as appropriate guidance for staff-level professionals and appears to be equally entrenched in both military, government, and commercial best practice. If otherwise inappropriate, the tone certainly reflects the frustration and exasperation of the author, a senior military officer, at the moment he put pen to paper and fits into the hierarchical military structure of World War II.

In my particular case, we were not at war, per se, but I guess my boss was equally frustrated with the amount of additional research and rework that was needed in order for him to make a confident decision. The article was a subtle way of educating the staff into a change in behavior. Unfortunately, the article never sat well with me. Instead of the intended effect, it only served as a reminder of the formal power relationship between a supervisor and subordinate. The challenges we faced were too big for any one of us to handle so we naturally faced them as a team. To suddenly be reminded of my place in the organization was not the kind of empowerment I become accustomed to and I was left feeling that the doctrine was severely out of touch with our reality. But as I reflect back on the experience, I wonder if we can recast the principles of this forlong doctrine to teach the trained initiative that is highly regarded but apply it to today’s team- oriented atmosphere.

Let’s start with the basic premise that a) everyone is busy, b) resources are tight and c) our team trusts us because of our knowledge, experience, and expertise. We were hired to shoulder the responsibilities expected of our position. Even if the decision- making authority formally resides somewhere else on the team, that person or group is relying on us to provide a recommendation for how to proceed as if it were our decision to make. To present a recommendation, the following objectives must first be met:

The figure below outlines a process for meeting these objectives in a logical framework. If we expect someone to make a decision, this format helps them understand the full context, complexity, and impact of the decision at hand. 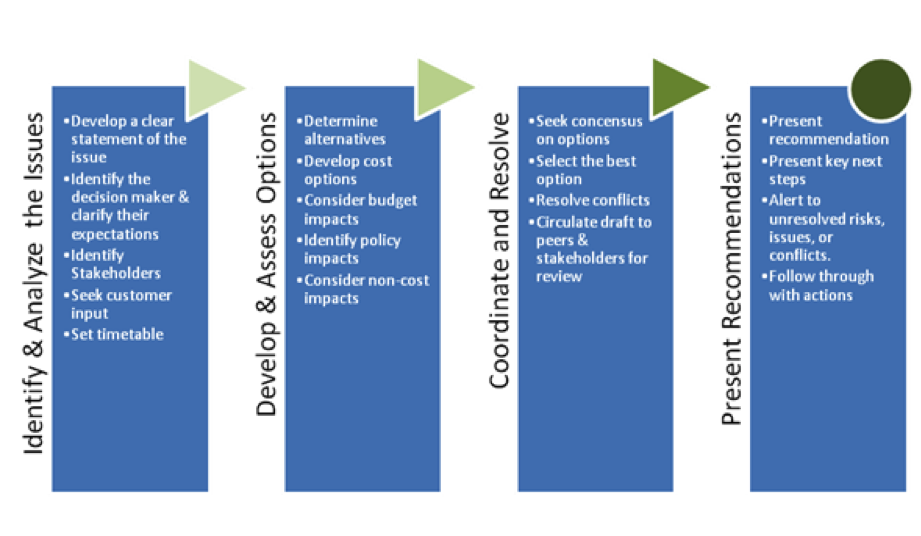 If this process is followed, the goal for the final presentation is to formally walk the decision-maker through the thought process. We are well-equipped to respond to leadership questions and concerns and with practice will learn about the dominant issues facing leadership. Over time, team trust is enhanced as the decision-maker understands the rigor applied to recommendations in this format. The table below can be used to format the recommendation whether through a presentation, white paper, or even a verbal briefing. 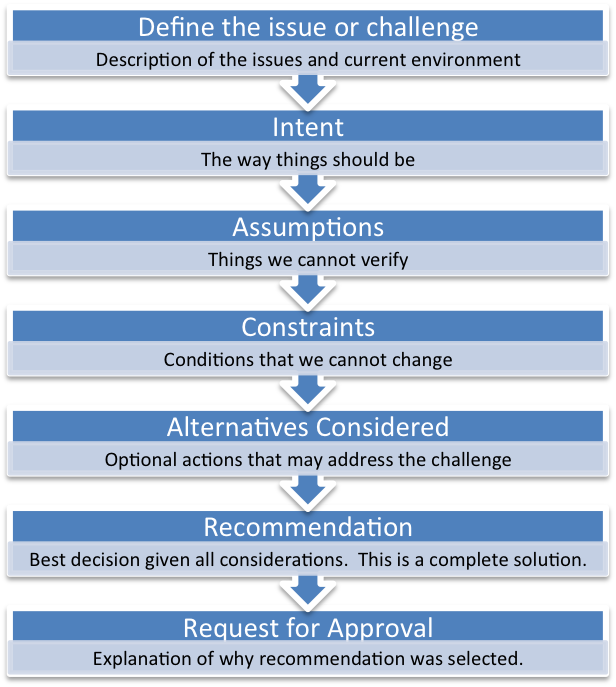 This approach contributes to the professional development of junior staff members, as well. It opens an opportunity to understand the context and consequences (both intended and not) of challenges faced by the leadership team. Additionally, it provides unique access to different thought processes of experienced decision-makers – how they weigh various factors, how they perceive the environment, and how they rationalize their decision. Working through solutions in this manner exposes us to the senior leadership thinking that most professionals aspire to and is a great way to demonstrate that ability to the leadership team. There is no better evidence of problem-solving than real decisions applied to challenges faced by the organization.

NOTE: The full Completed Staff Work doctrine is presented below. As you read it, don’t let the tone of the memo distract you from the real lessons in leadership that are presented.  The following memorandum has been reproduced countless times by military and civilian organizations since World War II. The original source of the memorandum is unclear. Some reports indicate that the memo was issued in January 1942 by the Provost Marshal General, U.S. Army. It has also been attributed to Brigadier G.E.R. Smith, a member of the Royal Canadian Army, who released it in 1943, while he was serving as Deputy Director of Supplies and Transport, First Canadian Army. It can be found here.

Our Most Popular Posts

Three Companies Proving Agile is Successful Outside of Software

Stop talking about ‘Real Time’; ‘Relevant Time’ is what matters

Read More About a Service

How We Can Help

Technical Assent exists to build high-performing government service organizations through experience design, solution implementation, and service management. Our approach is unique in that we improve service performance from the bottom-up, starting with customer experience.